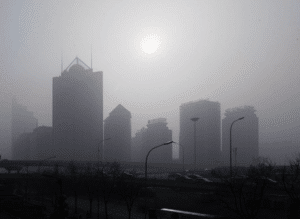 If you think you are not being affected by air pollution every single day; think again.

The World Health Organization continues to warn people of the dangerous impacts air pollution has on human health. Dr. Maria Neira, director of the WHO’s Department of Public Health states,”No doubt that air pollution represents today not only the biggest environmental risk for health, but I will clearly say that this is a major, major challenge for public health at the moment and probably one of the biggest ones we are contemplating.”

According to CNN, a new study released by the WHO found that 9 out of 10 people breathe air containing high levels of pollutants, killing 7 million people each year! Major cities around the world showed to be exceeding the WHO’s guidelines for air quality levels by more than five times. According to the article,  “people in Asia and Africa face the biggest problems,” but “cities in the Americas, Europe and the Eastern Mediterranean also have air pollution levels that are beyond what the WHO considers healthy.”

Aside from the alarming levels of air pollution outside your home, there is a major issue with indoor air pollution inside the home. “More than 40% of the world’s population does not have access to clean cooking technology or lighting (WHO). ” While we can make continuous efforts to be environmentally friendly to reduce air pollution outside, we can also improve the air quality in our homes by selecting non-toxic cleaning products, low VOC products, and eliminating sources of airborne particulates (smoke from wood, dung or charcoal stoves and heaters).

To read the full article written by CNN, click here